Since being designated as a New Town in 1967, the conurbation that has been developed around the village of Milton Keynes, Buckinghamshire, has grown rapidly in the ensuing 40 years.

One of the latest construction projects, centred on the Denbeigh district of modern Milton Keynes, is stadium:mk - a football stadium, arena and retail / hotel development. stadium:mk is also home to MK Dons, the football club famously (and controversially) moved from its former home and incarnation as Wimbledon FC, whose chairman Pete Winkelman is the mastermind behind the stadium development.

As a former music industry producer, and previously the owner of Great Linford Manor recording studios, it's unsurprising that Winkelman has taken a keen interest in the stadium's acoustics and audio system, going to great lengths to ensure that the sound quality is as high as possible for both football matches and other events at what is intended to be a true multi-purpose venue.

Despite being much more used to life behind much larger consoles, Hughes recommended the Yamaha LS9-16, not only for its sound quality but also its versatility and ease of use. Its ability to store and instantly recall settings means that it is very fast to set up for any number of different events, which may well have inexperienced users at the helm.

The first use of the console illustrated the flexibility required from the system, as the Alan Ball Memorial Cup match was played between a celebrity-strewn England XI and a Rest Of The World XI.

Commemorating the life of the recently-deceased England World Cup winner, the fundraising event saw the LS9 console accommodating live feeds from an outside broadcast truck, television coverage being relayed to the stadium while simultaneously broadcast on air, as well as being used for pre-recorded music and live announcements throughout the event in the stadium.

The new audio system has received many favourable comments, with Pete Winkelman noting: "Putting the Yamaha LS9-16 at the front end has enhanced our quality and control of the Stadium sound system - our fans noticed the improvement straight away." 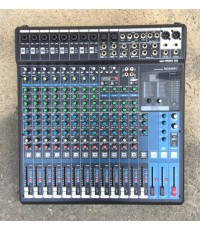